We thought it was all going to be OK… 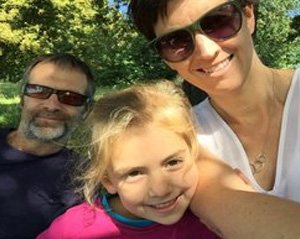 20 Aug We thought it was all going to be OK…

Posted at 10:16h in Stories by Adrian Brown 0 Comments

During Baby Loss Awareness Week we’re sharing different perspectives on baby loss from those whose experience is first hand. Today, Natalie blogs about her son Thomas, who sadly died shortly after he was born.

Our journey started back in 2009 when, after three years of being together we decided it was ‘time’ to start a family and in November 2010 the test result we’d been waiting for finally came through. We were thrilled and told our closest friends. We relaxed, we celebrated. We thought it was all going to be OK.

Then on December 22 I started to bleed. I remember watching TV after dinner and feeling a bit uncomfortable and then, with something in my head saying ‘check it, check it, check it’, I went to the loo and saw blood. I was only six weeks pregnant.

The grief and depression that overcame me and the unhappiness between my husband and I over the next five months was dreadful. While it was only my first miscarriage and only six weeks, the darkness and pain stuck; loss is loss and it becomes part of you.

Remarkably, five months later we fell pregnant again and after nine very nervous months, our daughter Alyssa was born. Her 12-week-scan was without a doubt one of the happiest moments of my life – right up there with her birth. She was beautiful and over the next 18 months we healed and loved. She is my rainbow and then some.

Eventually we thought it was time to try again and we fell pregnant straight away. We fell madly in love with the baby, and shared our wonderful news – Alyssa would be an older sister.

The problem was I just didn’t feel ‘right’. I tried to be positive and I carried on until, eventually the 11th week I felt a pop and a warm gush. I knew instantly it was over and went into auto-pilot. I drove for the hour or so back into town and met my husband at the hospital.

Even though it wasn’t a surprise, the scan was devastating. We were told there was an empty sac and no sign of a heartbeat. Our beloved baby of joy who I’d already held in me for 11 weeks was dead. Not just dead, but it was apparently not even there. What does an empty sac and a blighted ovum mean anyhow – what awful ways to describe my baby. Couldn’t they have just said it had passed away?

Two days later the miscarriage kicked in in earnest. The pain was like labour – so deep and overcoming and the blood – there was so much of it I ended up in A&E with a suspected haemorrhage.

The trauma of that physical loss sticks with me still today. I was so unprepared for the pain and sheer intensity of it all. There’s no way I should have been alone. But I didn’t really know – I stupidly hadn’t accessed any help. I hadn’t sought any advice. Like society, I had tried to downplay it.

Almost a year passed and we still weren’t pregnant so we sought private medical help and took the big step to IVF. Sadly by the time we reached this point we were ‘spent’ – we didn’t have much more left in us. We’d been trying for about five years and we were just so exhausted.

I was a complete nervous and hormonal wreck, but we got there. We made it to the 12-week-scan. We slowly relaxed and let the love and light back in. We started to prepare the nursery and choose names. But even this came crashing down.

We went along to our 20-week-scan full of excitement and nervous energy. I couldn’t quite shake the fear, but overall I was positive and excited. The scan was routine at first but after twenty minutes the sonographer still hadn’t shown us the baby or told us its gender.

The senior sonographer took over and told us that she could see abnormalities with the baby’s heart and kidneys. I remember taking a few minutes alone to scream in the bathroom outside the room. I remember my husband’s empty and shocked face. I remember not being able to breathe.
Thomas was diagnosed as having Patau Syndrome – it’s both very rare and very fatal. Babies are rarely born alive and those that are do not survive for more than minutes, hours, or days.

Thomas was born at 10.40am on August 13 2016 and miraculously he lived for twenty minutes in my arms. We sang to him, we told him we loved him, and we told him about his sister. It was all too short, and yet it was the gift of life we didn’t think we’d have with him. Oh to have held him. To have seen him wiggle. To have felt his warmth. I treasure those twenty minutes.

After two days, we left the labour ward with empty arms, but a strong resolve not to be consumed by the inevitable grief. Having been there before we made decisions for how we were going to survive losing Thomas. I took six months off work and we went ‘back’ to Sydney (I’m Australian) for three months of sun.

If only I’d found Tommy’s after I had my first miscarriage – who knows, maybe I would’ve handled the whole journey better. Maybe I would’ve sought medical help earlier.

I hope that anyone reading my story during Baby Loss Awareness Week who has experienced pregnancy loss or the death of their baby will feel able to seek support and not have to try to cope alone.