“He was perfect, he just looked like a sleeping baby.” – Baby Loss Awareness Week

“He was perfect, he just looked like a sleeping baby.” 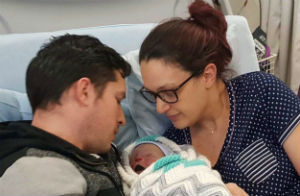 12 Oct “He was perfect, he just looked like a sleeping baby.”

Posted at 14:03h in Stories by Adrian Brown 0 Comments

We were over the moon to be expecting our first baby boy after having our two beautiful girls in 2010 and 2013.

They were so excited to be having a baby brother and couldn’t wait to help look after him! Eden was due on the 11th March 2018, that day came and went. My girls were both 10 days late so this was ‘normal’ for me.

On Wednesday 21st March I went to bed; Eden was wriggling away in my tummy as usual when I got into bed, I woke at 6.30am on the 22nd March, after 10 minutes I knew something wasn’t right as he would usually be wriggling away whilst I listened to the radio for a bit before I got up for the day.

I got up and sat at the dining table and I poked and I prodded and felt nothing in return, I called the day unit at the maternity ward and was told to go straight in.

The midwife could not find a heartbeat so took me straight through to be scanned and there it was confirmed by a consultant that Eden’s heart had stopped beating, me and my husband Daniel sobbed and all I could say to my husband was that I was sorry. I felt I had let him down and it was my fault!

We were then taken straight to the Butterfly Suite to discuss what would happen next. I was induced and we discussed what we wanted to happen after Eden was born; I decided I didn’t want to see him straight away because I was scared, so he was wrapped in his blanket and put into a cot at the bottom of my bed.

My mum was the first person to give Eden a cuddle, while my husband supported me to deliver the placenta.

When my husband brought him over to me, he was perfect, he just looked like a sleeping baby other than his lips were blue which I didn’t expect for some reason. We spent the next four and a half days in the butterfly suite with Eden where he was laid in a cold cot next to my bedside.

I am so thankful for this time as it gave me time to look at him, hold him and kiss him as this took me time to be able to do. We were able to share him with my close friends and family rather then have to just show them a photo.

The next couple of weeks went by so quickly, Eden was taken straight from the hospital to the funeral directors in a Moses basket on the Monday after he was born. His funeral was on the Thursday, which only me and my husband attended. Never did I think i would have to see my husband carrying his baby in a casket down the aisle. It’s an image I will never forget.

Exactly a week later Eden’s ashes were ready for us to pick up and the funeral director was amazing. He was very reassuring and gave us lots of advice and there was no charge for any of their services, which was very kind. Eden’s ashes are now at home in our bedroom until we decide what we want to do with them, if anything…

So far I feel we are coping with the death of our son Eden, thanks to our girls and our friends and family and for now I feel that is enough, but I know Sands are available to us if we need them and Bedfordshire Sands regularly have meetings close by.

We have been reassured that whether it’s in a week, month, or year’s time they are there to talk to. The staff at Bedford Hospital were great. Special thanks to Jodie a trained bereavement midwife who helped deliver Eden. She was amazing, she stayed over her shift and visited me on her day off.  A special lady I will never forget!

We were given a large bereavement pack to take home from Sands along with books for the girls: ‘We were going to have a baby but we had an angel instead’.

The midwives also sorted our memory box also from Sands and a teddy each for our girls, a memory card with lots of photos on and so much more. We are so lucky to have these memories, especially the ones from the Butterfly Suite.