“There’s no words that can describe that moment, your life just falls apart…” 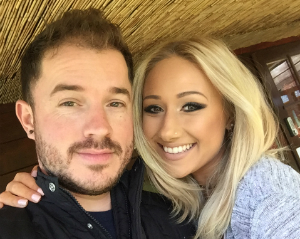 16 Oct “There’s no words that can describe that moment, your life just falls apart…”

Posted at 13:57h in Stories by Adrian Brown 4 Comments

I always knew I’d have twins, I don’t why or how I knew but since I was young it just felt as though it was written in my stars, and in October 2017 those longed for magic two lines appeared, it was our first pregnancy and we were surrounded by friends either having children or getting married, we couldn’t have been happier to be a part of that club.

Six weeks into the pregnancy I woke up in agonising pain; we underwent numerous tests in A&E which were all thankfully fine. To err on the side of caution the following day we were scanned; I no longer had any pain but I couldn’t wait to have a scan, the sonographer turned the image around to show us two perfect little flickering maltesers on the screen, we were having twins!

We never did find out why I had that pain but neither of us cared, we were so unbelievably happy, we wanted to scream and tell the world!

At nine weeks we were scanned again so full of excitement, after all we’d had three weeks of imagining our future life, planned how to announce the news to our family, googled the best twin prams and so forth. The sonographer took her time, barely speaking but eventually told us both they were MCDA twins. As a children’s nurse and having worked in NICU I knew this was a more complex type of twins and the difficulties that may lay ahead. We left that day in two very different frames of mind, my partner Matt is such a positive soul, it felt so cruel to talk about the risks and dampen his dreams, but he was convinced nothing would go wrong and if it did we were strong enough to face it.

From there on in we were scanned regularly and at twelve weeks there was a noticeable difference in the twins size, we were reassured that the difference wasn’t too significant so we went home and tried to enjoy Christmas while waiting for the next scan. It was a good Christmas, we decided to announce our pregnancy on social media like most couples do, perhaps naively. It was becoming difficult to hide, I already had a bump, partly due to having twins, but mostly a family trait to blame! I didn’t really care though I proudly showed off my bump, The twins naturally consumed most of our conversation, we talked so much about how next Christmas would be so very different with two little ones.

At sixteen weeks the scan showed a much more significant difference in our twin’s size, and we were referred to a fetal medicine unit for more advanced scanning to find out why. We were scanned by a whole team of doctors, the scanning went on for around an hour, we heard all sorts of heart sounds and wave lengths and them closely looking at the blood flow, they measured and re measured every centimetre of the twins. We were diagnosed that day with Type III selective IUGR, something we sadly grew to know an awful lot about. Simply put, it meant our smaller twins blood flow from the placenta to its body wasn’t working like it should and this meant his growth was restricted.

We were scanned every week to two weeks at FMU and each scan showed our smaller twin deteriorating before our eyes, I slowly began to lose hope for our smaller baby but Matt kept our positivity afloat. The night before every scan neither of us got much sleep, and after each one we were left emotionally devastated going over and over their weights as the difference became larger, their discordance at its worst was 40%. I prayed that the baby’s would stay strong for us, forever looking out for signs that things would be OK; I lost count of the amount of magpies I saluted. At twenty weeks we found out the little babies were boys, I remember thinking thank goodness they’re boys, hopefully they’ll have Matt’s strength.

We were booked for a caesarean section at twenty seven weeks, the earliest they would deliver them and we desperately prayed that they would be strong enough to carry on until then, but our smaller boy’s heart was struggling. We never had a normal scan, things never stayed the same as the last or got better they only got worse each time we went, it was like torture. They always looked so well on the screen, sucking their thumbs, kicking the Doppler off the doctors, they had such a cheekiness about them, and we were already in love with their personalities. I couldn’t bare the thought of him struggling, but there were no options for us, no treatment, and seemingly we were the worst case professionals had seen. We were discussed across all the major London hospitals and they were screaming for us to have laser ablation but this gave our smaller boy barely a chance of survival. After endless conversations and second opinions our innate urge to protect both our boys took over and we just couldn’t do it to him, but the likelihood of taking both babies home was diminishing.

I clung on to every ounce of hope I could find left in me, but we knew how unpredictable our son’s diagnosis was and we could lose our smaller boy at any minute. We became obsessed with their movements and I lost count of how many times we went to the hospital after I’d not felt them move for a short time, I was a nervous wreck.

On March 9th 2018 I woke up and felt nothing, it wasn’t like the other times, it was hollow, and empty, I knew he’d gone. I didn’t call to prepare our family like I had done every other time we went up, I couldn’t speak. We went up to the hospital and we were told the news we’d been dreading all this time, ‘I’m so sorry, there’s no heartbeat’.

There’s no words that can describe that moment, your life just falls apart, everything changes and there is nothing left in you. I cried so loudly and yet I couldn’t even hear the sound, the room just felt like a blur, like I wasn’t really there. I could see Matt at my feet with no expression just pure shock, he’d always stayed more positive than I could. Our other boy was really affected by his death, his heart was incredibly slow and they wanted him out. Within minutes I was gowned up, needles in every vein and in theatre, we were 24+2, and I knew the odds were poor, probably more than most but no matter how numb I felt there was still a flicker of hope that he might be ok, he might fight and prove them all wrong, I still had the chance to bring one baby home.

Within minutes I became a mother but not like most, our surviving boy didn’t live long, I was under anaesthetic so I didn’t know until I came around, but Matt had held them both together for his last few breaths next to me. His last few minutes were full of warmth and love, next to his brother and with us both. When I came round and got to hold them, I couldn’t believe my eyes. It was as beautiful as I’d imagined it to feel, you don’t realise they aren’t breathing or that you can’t hear them cry, or see them open their eyes. The most perfect little bundles you have ever seen, so perfectly formed like any living baby, just smaller. They weighed just over a pound each, a pound of perfection. They looked just like Matt and I. We named our boys Hartley and Bowen, and like any other first time parents we had all of our family come to the hospital to meet them, so full of sadness and love at the same time.

We were in hospital all weekend and the time came to say our final goodbyes and leave the hospital without our beautiful boys, this day was the 11th of March 2018, mother’s day. A cruel twist in our story, was I even a mother? Every step out of that hospital was agony, unbearable even, holding our memory box and not our sons in their car seats.

Emotionally and physically I have been through the most unimaginable trauma to most, but there is something so very positive to being Hartley and Bowen’s mummy. It has been 24 weeks since I said goodbye to our boys, the same amount of time I was lucky enough to carry them. Things haven’t got easier, I don’t think they ever do, life just seems to continue but you learn to live with the emptiness, the hole in your heart that only they can fill. They are in our lives every day, not in the way we had imagined, but in every room we have a reminder of their beautiful presence. I am so proud of their fighting spirit and I am proud to think of them every minute of every day, because they have filled our lives with so much love and have taught us strength we never wanted to have to find.

We’re slowly falling across difficult dates, painful reminders and anniversaries, but our boys aren’t a bad memory in our lives, they are the light in our lives and I wanted their story to help others. Matt and I still read other people’s stories of loss in those darkest hours to feel less alone, and we have become members in one of the bravest communities I’ll ever know, but for those struggling there are better days coming just hang on for them. For now we’ll carry on stumbling through our differently landscaped parenting journey filled with our boys love and strength.