My son had died but my daughter needed me… 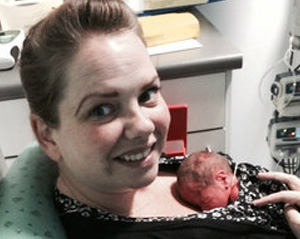 20 Aug My son had died but my daughter needed me…

Posted at 10:22h in Stories by Adrian Brown 0 Comments

During Baby Loss Awareness Week we’re sharing different perspectives on babyloss from those whose experience is first hand. Today, Fiona talks about her son, Innes, who sadly died shortly after he was born.

In January 2015 I found out I was pregnant with twins, due in September. Our early scans went perfectly, but as our 20 week scan arrived, I became extremely anxious that something was wrong. We could see that one twin (Innes) was much smaller than the other and he didn’t seem to have any kidneys. A more detailed scan the next day confirmed this diagnosis, as well as showing that his heart wasn’t beating properly and he had no fluid around him. The second twin, a girl (Freya), seemed to be healthy. The best case scenario was that I would carry both the babies to delivery, where we may have a few minutes or hours with Innes and Freya would be born healthily.

On 16 July 2015, I woke up with contractions and a while later my waters broke, ten weeks early. Innes arrived at 02.47am the next day with Freya arriving at 02.50am. We spent time holding Innes, taking him all in and making memories. At 06.36am they checked his heart and he had gone, he’d passed away in his daddy’s arms.

I was broken: my son had died but my daughter needed me, not to mention my older son who needed his mum more than ever. My emotions were everywhere.

We had a very private funeral for Innes on 3 August 2015. I don’t remember much about it, but I do remember thinking how proud I was to be travelling in the same car as our precious boy. I could see my husband Simon was breaking: the man who had held it together for me since that fatal scan was finally letting it all go as we carried our boy’s coffin.

Two years on it hurts just as much as it did then. But as a family we are starting to enjoy life again. Some days are worse than others but I have children that need their mum and I want to teach them that it’s ok to be sad and to remember Innes. Freya is a brave girl and I know she will take it all in her stride as she gets older. One thing I found that helps is just taking it day by day. You never really heal but you learn to deal with it differently.