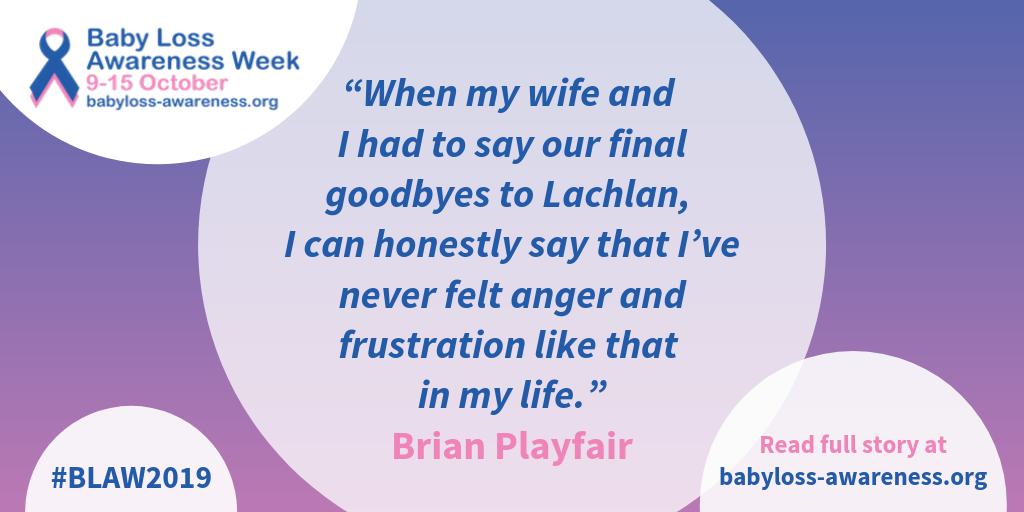 Posted at 11:11h in Stories by Adrian Brown 0 Comments

Baby Loss Awareness Week raises awareness of pregnancy and baby loss and drives improvements in the care and support for those affected. This year the focus is on the need for psychological specialist support to be available free of charge to parents affected by the death of a baby.

“My son Lachlan was stillborn in 2014 at 34 weeks. He was our second child. He was moving around quite a lot during the pregnancy but it was a Tuesday night when my wife noticed she’d not felt Lachlan move for a while.

Whilst at home that evening we were trying to stay calm but were starting to get worried.  We both worked in Derriford Hospital at the time so we went down to maternity first thing the next morning.

I felt utterly numb, all I could do is support my wife who was naturally very upset. We had to return to hospital two days later for my wife to give birth to Lachlan but the labour lasted another two days which only compounded our anxiety.

Lachlan was born weighing just over 5lbs and looked so healthy and peaceful, as if he was asleep.  He looked so much like our daughter Chelsey. Whilst holding him I had to keep reminding myself that he wasn’t with us and if I moved my arm slightly his mouth would open involuntarily, reminding me that we’d lost him.

When my wife and I had to say our final goodbyes to Lachlan I can honestly say that I’ve never felt anger and frustration like that in my life. I was working as a medic in the Royal Navy at the time of Lachlan’s death and I was under a lot of negative pressure from my superiors.

We were given information on Sands after losing Lachlan which was very useful, knowing that support was there.  Due to me luckily receiving help from the Royal Navy I didn’t pursue help from Sands and my wife wasn’t comfortable talking to a stranger at that time.

While supporting and getting my wife and daughter through this terrible time, I didn’t make my own grief a priority which affected my mental health more than I realised.

I was posted to HMS Raleigh 10 months after Lachlan’s death and things calmed down. But I had an experience which triggered post-traumatic stress disorder (PTSD) and I was also diagnosed with severe depression. For the next three to four months I felt emotionally numb, I didn’t want to see anyone or do anything.  I found myself getting very upset at the drop of a hat and I would sometimes lose my temper with members of my family.

I was signed off sick from work for four months.  I wasn’t fit to be at work, especially as I was a medic and would be responsible for seeing patients, it was the right to do.  My wife supported me but I wasn’t able to see friends as I just didn’t know what to say.

I underwent eye movement desensitization and reprocessing (EMDR) treatment, which is a type of therapy used to treat the symptoms of trauma. I found going for short walks after treatment sessions would help me clear my head and make sense of things.  EMDR can be very hard initially and so I found walking and listening to music very helpful. I also took prescribed medication and I was monitored by the Navy’s mental health team for nine months. I was medically discharged in January 2016.

Since then I have still struggled with the memory of my son’s death. But with occasional counselling and being part of a veterans rowing team which has helped me, I have now recovered.

I’m now in a place where I want to bring forward the help that Sands can offer to bereaved parents out there that need that support.”