Posted at 16:44h in Stories by Aleesha Khaliq 0 Comments 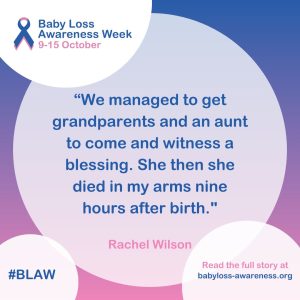 Ophelia was twin two of identical twins. We realised very early on in our pregnancy that we were going to have a very hard pregnancy. We were diagnosed at 12-weeks with TTTTs (twin-to-twin transfusion syndrome) with Ophelia being the donor.

With appointments at Kings alongside our local hospital they decided to do a laser ablation to separate the two girls at the early stage of 17 weeks. At 18-weeks, as a result of the surgery my waters broke.

At 27+4weeks I went into natural labour. After a few attempts to stop my labour, we realised it was progressing quickly and I delivered both girls at 03:45 and 03:46. They were both sent to the neonatal ICU.

They needed to be transferred to a level 3 NNU and so the wait came for 2 spaces at the same unit. However, Ophelia was not coping, and we were told that she was dying. We managed to get grandparents and an aunt to come and witness a blessing. She then she died in my arms nine hours after birth.

We miss and love her every day and wonder about how her character and relationship with her sisters would have been.

Twins Trust– the Twins Trust Bereavement Support Group (BSG) exists to support all parents and carers of multiples who have experienced loss whether it was during pregnancy, at birth or at any point afterwards. They can be reached via email.